Listen to invited talks from some of the pioneers within the field, Paul Debevec and Manmohan Chandraker!

We are very proud to announce that the two main invited speakers at the workshop will be Paul Debevec and Manmohan Chandraker, both having made great contributions to the challenge of measuring and modelling shape and appearance.

Paul Debevec is a Senior Staff Engineer at Google VR and an Adjunct Research Professor at the University of Southern California’s Institute for Creative Technologies. Since his 1996 Ph.D. at the University of California at Berkeley, Debevec’s publications and animations have focused on techniques for photogrammetry, image‐based rendering, high dynamic range imaging, image‐based lighting, appearance measurement, facial animation, 3D displays, and virtual reality.  Paul received SIGGRAPH’s first Significant New Researcher Award in 2001 for his contributions to image-based modeling and rendering and a Scientific and Engineering Academy Award® in 2010 for his contributions to the Light Stage facial capture systems, now used in over 30 major motion pictures. He recently served as Vice President for ACM SIGGRAPH and co-chairs the Academy of Motion Picture Arts and Sciences’ Science and Technology Council. http://www.debevec.org/ 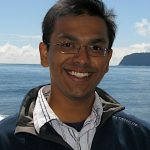 Manmohan Chandraker received a B.Tech. in Electrical Engineering at the Indian Institute of Technology, Bombay and a PhD in Computer Science at the University of California, San Diego. Following a postdoctoral scholarship at the University of California, Berkeley, he joined NEC Labs America in Cupertino, where he conducts research in computer vision. His principal research interests are sparse and dense 3D reconstruction, including structure-from-motion, 3D scene understanding and dense modeling under complex illumination or material behavior, with applications to autonomous driving, robotics or human-computer interfaces. His work on provably optimal algorithms for structure and motion estimation received the Marr Prize Honorable Mention for Best Paper at ICCV 2007, the 2009 CSE Dissertation Award for Best Thesis at UC San Diego and was a nominee for the 2010 ACM Dissertation Award. His work on shape recovery from motion cues for complex material and illumination received the Best Paper Award at CVPR 2014.